Entrants must be 25 or Under

‘War poetry’ is a phrase that, for many of us, brings to mind the lines of Wilfred Owen or Siegfried Sassoon   – “what passing-bells for these who die as cattle?”; “O, but Everyone/ Was a bird; and the song was wordless; the singing will never be done.” The poetry of the First World War has been consistently anthologized, remembered and studied in classroom and universities across the world. The poetry of the Second World War, in contrast, seems to have much more of a fragile grip on our public consciousness – although this is a balance that many are seeking to redress.

The Poetry Society’s Timothy Corsellis Prize, hosted on Young Poets Network, was created and memory of a young poet and pilot killed in 1941 at the age of 20. Timothy Corsellis’ poems explore the experience of the Blitz and the combined boredom and exhilaration of flight training. Originally a conscientious objector, Timothy volunteered for the RAF in 1940. However, horrified to be put under Bomber Command, which would involve the bombing of civilians, he requested a transfer, and before his death, spent six months as an Air Raid Precautions Officer, helping civilians through the Blitz. There is a fascinating biography of Timothy here on the War Poets Association website if you’d like to find out more, and you can also hear actor Tim Bentinck reading Timothy’s poems ‘Engine Failure’ and ‘Dawn After the Raid 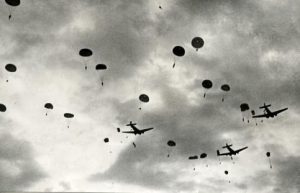 The Timothy Corsellis Prize, named in his memory, was originally launched in 2014 and encourages young poets up to the age of 25 to explore the poetry of the Second World War, and the lives and legacies of its authors, by producing their own poetic responses. The 2016 Prize profiles the work of seven poets writing during the war years: Keith Douglas, Sidney Keyes, Alun Lewis, John Jarmain, Henry Reed, and Anna Akhmatova.

All these poets – lesser-known to many than Sassoon, Owen or Rosenberg, but poets of just as much power – wrote with great insight of their experience of war. Keith Douglas noted that “Hell cannot be let loose twice”, and there seems to have been a sense of this among poets of the Second World War, resulting in a markedly different – although no less vivid or valuable – style of war poetry. You can find out more about each of the seven poets featured in this year’s prize, and read examples of their work, by following the link to this special article on Young Poets Network.

The winner of last year’s Corsellis prize, Jenny Burville-Riley, used Alun Lewis’ poem ‘All Day It has Rained’ as the inspiration for her own haunting tribute and prize-winning poem:

Hovering ghosts in Himalayan foothills
skin beautifully cool, eyes
hollow as spent cartridges
we exhale smoke from Victorys
by the side of a road that passes
the convalescence hospital.
Rough cut layers of mountain above
march in sturdy sequence to
a towering crescendo of white summits.
Geology softens in morning light
transforms to crumpled piles of jumble
waiting to be rifled through.
Beneath, a lone Sherpa
starts his slow ascent, bent back
burdened with a baby grand piano
stiff legs skyward as a big game trophy.
We watch the weighted figure
with amazement for the Sherpa
is a mere eighth-rest of a man.
“Look at that lazy bugger”
quips Dusty and quick laughter
landslides in a throaty scree.

Jenny writes: “In Lewis’s poem there is the juxtaposition of mundane details such as “darning dirty socks” with dramatic images such as “dropping bombs on Rome” and “herded refugees”. I tried to create juxtapositional images too: a raw, rugged environment vs the strange, unexpected appearance of a refined instrument – the baby grand piano – on a man’s back!”

Young Poets Network has already received many fantastic entries to the 2016 Corsellis Prize, and it’s encouraging more! As well as poetry, Young Poets Network also welcomes the insights of essayists in its Corsellis Young Critics Prize, which runs concurrently with the poetry prize, and asks you to write about which three poets of the seven listed above you think are most likely to be read in twenty years’ time, and why.

Both prizes are open to all young writers aged 25 and under, living anywhere in the world. The deadline for all entries is Monday 15 September.

The judges for both prizes will be Professor Fran Brearton (for the War Poets Association), a leading authority on war poetry; Nic Vanderpeet from Imperial War Museums; Judith Palmer, Director of The Poetry Society, and, new to the panel this year, Wendy Cope, noted poet and author of, among other collections, Making Cocoa For Kingsley Amis.

For more information and for details of how to submit your work, please visit the Timothy Corsellis Prize page on Young Poets Network.

Young Poets Network is The Poetry Society’s online platform for young poets up to the age of 25. Here you’ll find features about poets and poetry, challenges and competitions to inspire your own writing, new writing from young poets, and advice and guidance from the rising and established stars of the poetry scene. We also bring you the latest news and ideas from the writing world, and a list of competitions, magazines and writing groups which particularly welcome young writers.

Young Poets Network would like to thank the Corsellis family for their generosity in establishing this Prize and their continuing support of The Poetry Society.

The Turning Point – Tour to France