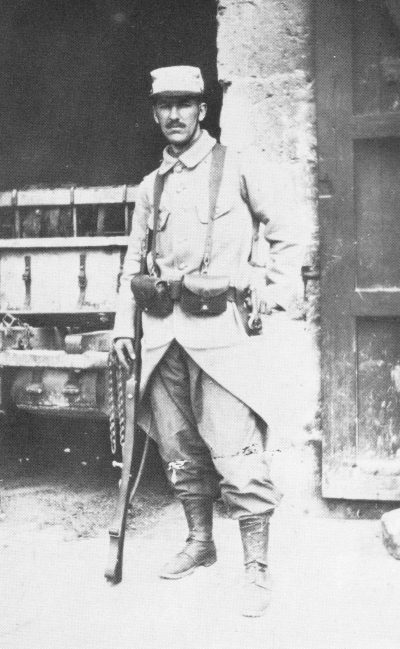 One hundred years to the day after he fell in battle Alan Seeger would still be commemorated as a hero of France in ceremonies in Paris and the village of Belloy-en-Santerre, the place of his death on July 4, 1916.

Born in New York City on June 22, 1888, Seeger grew up on Staten Island and in Mexico City. A Harvard graduate in 1910, he spent two aimless and unhappy years in Greenwich Village, but as a prelude to his move to France, where he seemed to come fully to life in Paris and in the anticipation of his death in war.

At Harvard, he had become increasingly medievalist in spirit and philosophy, and in Paris he lived in the neighborhood of the Cluny Museum’s re-creation of that era and of the University of Paris, born of the Middle Ages. The values were of honor, duty, chivalry, fidelity, and the grace of the knight in a naturally violent world.

Upon the German invasion of France in August 1914, he joined the French Foreign Legion, and wrote to his mother that he hoped she would see the thing as he did. “. . . [I]n this universe strife and sternness play as big a part as love and tenderness, and cannot be shirked by one whose will is to rule his life in accordance with the cosmic forces he sees in play about him.”

Seeger believed in those forces as the ultimate authority, and, as a soldier in war, they became even more apparent. In the stalled trenchline that stretched north from Reims to Ostend he took frequent duty as the night sentinel, during which the soldier had “ample time for reflection. Alone under the stars, the war in its cosmic rather than its moral aspect reveals itself to him.”

The moral revelation was certain and forceful. Its energy produced a series of dispatches in The Sun (New York), and an essay in The New Republic that the French would see as contributions to the eventual American decision to join the war. The poetry that derived from that force was of the soldier’s inevitable and glorious fate. The most enduring of those poems, “I Have a Rendezvous with Death,” predicted his inevitable end “at midnight in some flaming town.”

The rendezvous took place, however, on a summer afternoon at the edge of the already destroyed Belloy-en-Santerre. As his regiment advanced, he took fire that stopped him in place, though not so badly that he couldn’t be seen cheering on his fellows, a smile on his face. Eventually, his body would be lost to the continuing destruction of battle.

Except in France, the true impact and importance of Alan Seeger, his poetry and his actions in war has never been settled.

The two books published in the year after his death, Poems and Letters and Diary did well enough that their royalties could be used to help found the American Library in Paris, but the poetry was criticized by some as old-fashioned and immature.

Though a firm believer in the acceptability of his own death in war, the family that would follow him would be anti-war in its public expression. His brother, the musicologist Charles Seeger, Jr., was a conscientious objector and the father of anti-war folksingers Pete Seeger and Peggy Seeger who would most often speak of their uncle in skeptical terms. Some historians would seem to want to deny him the very fact of his own death by insisting that its given auspicious date of July 4 was a fabrication. It was not.

As memorials were held under the statue of Alan Seeger at the place des États-Unis in Paris, 500 people from five nations gathered in Belloy-en-Santerre to observe the centennial of his death. Also honored were the German poet Reinhard Sorge and the Catalan intellectual Camil Campanya. All three had been killed near the village on both sides of the Battle of the Somme, each of them a narrator of war. In the late morning, a marching band and dignitaries traveled to nearby Harbonnières where it was now believed, or at least officially determined, that Seeger’s bones rested in the ossuary at the Nécropole Nationale de Lihons.

A Rendezvous with Death: Alan Seeger in Poetry, at War, by Chris Dickon (New Street Communications, 2017)