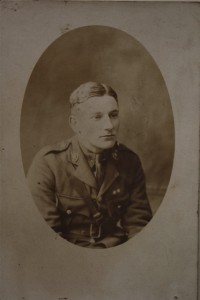 Edmund Charles Blunden grew up in Yalding, Kent where both his parents were schoolteachers. Rural life suited him, despite the difficult times sometimes faced by the family of nine children. His love and knowledge of his village and the Edwardian countryside and its ways are to be found as a theme in much of his poetry. He won a scholarship to Christ’s Hospital School where he flourished academically. He started to write poetry in his teens and was due to go up to Oxford but instead went to France in 1916. The next two years he spent in the trenches and so became the longest serving war poet. He won the M.C. for ‘conspicuous gallantry in action’. Out of this experience came many war poems and the now classic Undertones of War, a prose account of his war years.

He married Mary Daines in 1918 and lost his first daughter when she was forty days old in 1919. The grief for her and the losses he encountered in the war are a recurrent undertone in his poetry. At this time he and Siegfried Sassoon became friends and remained so until Sassoon’s death. Blunden entered with enthusiasm into the literary world of London and became a literary journalist and teacher working on the Times Literary Supplement, teaching in Tokyo University , Oxford University and later Hong Kong University. His literary output was prodigious he wrote reviews, articles, introductions, essays, biographies, poetry and he edited other poets. He championed lesser known poets like Smart, and introduced poets such as Clare, Gurney and Owen to the literary public. He was elected Professor of Poetry at Oxford towards the end of his life. He married three times, his second wife being the writer Sylva Norman and his third Claire Poynting. He had seven children in all.

He produced several volumes of poetry throughout his life. As a war poet he offers a different perspective compared with other war poets. Desmond Graham writes that he is concerned overall with ‘war’s haunting of the mind’ ; his collected war poems bear this out and if we want an idea of what it was like to fight and survive WW1 then we can go to Blunden to give it to us. The following poem demonstrates the psychological price exacted by war.

Tired with dull grief, grown old before my day,
I sit in solitude and only hear
Long silent laughters, murmurings of dismay,
The lost intensities of hope and fear;
In those old marshes yet the rifles lie,
On the thin breastwork flutter the grey rags,
The very books I read are there – and I
Dead as the men I loved, wait while life drags

Its wounded length from those sad streets of war
Into green places here, that were my own;
But now what once was mine is mine no more,
I seek such neighbours here and I find none.
With such strong gentleness and tireless will
Those ruined houses seared themselves in me,
Passionate I look for their dumb story still,
And the charred stub outspeaks the living tree.

I rise up at the singing of a bird
And scarcely knowing slink along the lane,
I dare not give a soul a look or word
For all have homes and none’s at home in vain:
Deep red the rose burned in the grim redoubt,
The self-sown wheat around was like a flood,
In the hot path the lizards lolled time out,
The saints in broken shrines were bright as blood.
Sweet Mary’s shrine between the sycamores!
There we would go, my friend of friends and I,
And snatch long moments from the grudging wars,
Whose dark made light intense to see them by.
Shrewd bit the morning fog, the whining shots
Spun from the wrangling wire; then in warm swoon
The sun hushed all but the cool orchard plots,
We crept in the tall grass and slept till noon.

Poems of Many Years by E. Blunden, Collins

The Truth of War by Desmond Graham, Carcanet