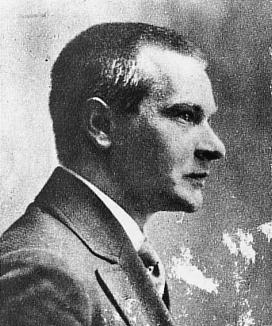 Georg Trakl (1887-1914) was born in Salzburg. Amongst his six brothers and sisters it was his sister Catherine with whom he felt a shared identity: his other Self. He evokes her image in his poetry as a healing and cooling spirit, a priestess in desolate places. The colours blue and white are associated with her elusive shade. Trakl’s mother Maria Katharina remained a distant figure; she was a drug addict, mainly occupied with her trade in antiques, leaving the children in the care of a French governess who stayed with the family for thirteen years. Under her influence, Trakl developed a lasting interest in French literature, particularly the Symbolist poets: Appolinaire, Baudelaire and Rimbaud, who remained an essential influence.

After pharmacological studies Trakl served in the Austrian army’s Medical Corps at Innsbruck. He transfered into the Reserve and tried to find a normal career in Vienna and Salzburg. His attempt to establish a pharmacy failed. In 1906 his early plays were performed in Salzburg with little success. From 1908 he gained a growing reputation for his poetry beyond his Austrian homeland. Together with his friend and protector Ludwig Ficker he edited and contributed to the avant-garde literary magazin Der Brenner. In 1913 the publisher Kurt Wolf in Leipzig published his first volume of poetry. A second volume was published 1915, posthumously, under the title Sebastian im Traum. Friends supported him financially in order to allow him to travel and to write, amongst them Ludwig Wittgenstein with an anonymous stipend. His last three years in Innsbruck brought him in contact with thinkers and artists who charted the last days of the dying Habsburg Empire, amongst them Karl Kraus, Adolf Loos and, from 1912, friendship with the painter Oskar Kokoschka.

At the outbreak of the war 1914 he was called up and was sent as Dispensing Officer in the Medical Corps with the rank of Lieutenant, to the front in Galicia, the eastermost province in the Habsburg Empire, now partly in Poland and partly in the Ukraine. Here he participated in the first major battle between the Austrian and Russian armies at Grodek. After the ferocious slaughter of the battle he found himself in charge of a barn filled with ninety severely wounded soldiers – the only medical officer, a dispensing pharmacist without supplies. In the agony of his despair he attempted to kill himself: his friends wrestled the gun from his hand. In the psychiatric ward of the military hospital in Krakow, where he had been sent for observation, he died on the 4th of November 1914 of an overdose of cocaine to which he was addicted.

In the decade before the Great War, the alienation from the traditional and frozen structures of the social order found new forms of expression in the visual arts as in poetry. Edward Munch’s painting ‘The Scream’ (1893) is perhaps the first document of an existential loneliness in a fractured world. A group of artists united in Die Brcke (Dresden, Berlin 1905-1913). Painters were poets, poets painted. Georg Trakl used this new expressionist language to formulate his own predicament. The fragmentation of a normal grammatical structure, the deliberate encryption of meaning, an intentional jarring of rhythmic flow is far removed from the elegiac tone of Georgian poetry in English writing. It is only in Eliot’s The Wasteland (1922 ) that we hear a similar voice.

From deadly weapons the autumn woods resound
At dusk; the golden plains,
Blue lakes, whereover rolls in gloomier light
The sun; night embraces
Dying warriors, the wild lament
Of their broken mouths.
But quietly there in the willow ground
Red mists collect, where dwells a wrathful god,
Spilt blood poured out, lunar coolness.
All roads end in black putrefaction.
Under the stars and golden branches of the night
The sisters shade sways through the silent grove
To greet the ghosts of the heroes, the bleeding heads;
And softly in the reeds resound the dark flutes of autumn.
O prouder lament! You brazen altars,
Today a mighty sorrow feeds the spirit’s searing flame,
The grandchildren unborn.

Other poems by Trakl reflecting his war experience:

In the East (Im Osten)