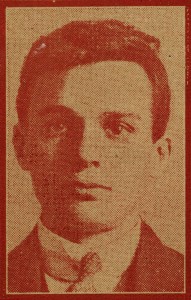 Leslie Coulson’s output consists of one slim volume published posthumously in 1917, but one poem, Who Made the Law, has become familiar to readers of First World War poetry since its appearance in the Hibberd and Onions anthology of 1986.

Coulson’s father worked his way out of poverty in the East End of London to become a columnist on The Sunday Chronicle. He sent his two sons to a modest but progressive Norfolk boarding school which fostered imagination, love of nature and the principles of gentleness and justice. Leslie became a reporter on The Evening News. In 1914 he moved to The Standard as an assistant foreign editor but, when war broke out, enlisted as a private in the 2/2nd Battalion of the Royal Fusiliers.

The poetry he was writing at that time employed conventional literary notions and forms: pastoral motifs, archaic diction and the metre, imagery and refrains of the English ballad.

He left England on Christmas Eve 1914. The battalion went first to Malta but in October 1915, after a months training in Egypt, was shipped to Helles on the Gallipoli Peninsula. After twelve weeks in and out of the lines came the evacuation to Egypt. Coulson was taken to hospital, suffering from a fever. Rejoining his unit, he wrote The Call of the Sea, a poem which continues to take the natural world as its subject but reveals a new sense of the malevolence of nature.

In April 1916 the battalion went to France, where it was disbanded; Coulson, now a sergeant, was sent to the 1/12th Battalion (the Rangers) who on 1 July were in the diversionary attack on the Gommecourt salient north of the main Somme offensive. The Rangers lost 17 of their 23 officers and 498 of the 780 other ranks that day.

Two poems show a change taking place in Coulson’s writing. In But a Short Time to Live his treatment of war is grimly realistic, while The Rainbow shows him employing the familiar pastoral tradition for ironic purposes; but what is startling in the latter poem is the poets implication of himself and his companions as agents of the forces of darkness:

When night falls dark we creep
In silence to our dead.
We dig a few feet deep
And leave them there to sleep
But blood at night is red,
Yea, even at night,
And a dead mans face is white. And I dry my hands, that are also trained to kill,
And I look at the stars for the stars are beautiful still.

On 7 October the Rangers took part in the battle for the Transloy Ridges. Coulson, in the first wave of the attack, was shot in the chest. He died the next day at Grove Town casualty clearing station. The manuscript of Who Made the Law? was discovered amongst his possessions.

Until its close this poem might be read as a political statement, but the final stanza reveals it as a spiritual outcry. It is God who has betrayed the human race. Perhaps, like Owen or Rosenberg, Coulson would have moved on to a more complex view of religion or a more politicised perception of the war, but the poem is a poignant and compelling conclusion to his life and his career as a poet. It is an attempt to break into new forms, with its insistent hexameters and the way in which the familiar rural images are yoked terribly to images of death. But it is principally about the waste of human life. It is remarkable for its anger, its humanity, its foresight â€“ and its form. And it was written in September 1916, barely half-way through the war.

When his poems were published in 1917, Coulson’s life, work and death lent themselves to the prevailing myth of innocent and willing sacrifice; a strain of hagiography characterises comtemporary obituaries and reviews. This idealised portrait took no account of how twenty-two unbroken months of service, and in particular, five months on the Somme in 1916, changed the man and his writing. Who Made the Law shows a comprehension of the horror and outrage of war and an awareness of evil that were growing in Coulson’s writing from Gallipoli onwards.

WHO MADE THE LAW?

Who made the Law that men should die in meadows?

Who spake the word that blood should splash in lanes?
Who gave it forth that gardens should be bone-yards?
Who spread the hills with flesh, and blood, and brains?
Who made the Law?

Those who return shall find that peace endures,
Find old things old, and know the things they knew,
Walk in the garden, slumber by the fireside,
Share the peace of dawn, and dream amid the dew
Those who return.

Those who return shall till the ancient pastures,
Clean-hearted men shall guide the plough-horse reins,
Some shall grow apples and flowers in the valleys,
Some shall go courting in summer down the lanes –
THOSE WHO RETURN.

But who made the Law? the Trees shall whisper to him:
“See, see the blood – the splashes on our bark!”
Walking the meadows, he shall hear bones crackle,
And fleshless mouths shall gibber in silent lanes at dark.
Who made the Law?

Joining the Scots Guards when he left Eton in 1916, Perowne served the war, and became a diplomat.

Thou art no longer here,
No longer shall we see thy face,
But, in that other place,
Where may be heard
The roar of the world rushing down the wantways of the stars;