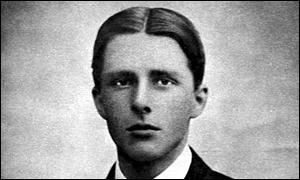 Rupert Brooke was born in Rugby and attended Rugby School, the English Public School famous as the home of rugby football, where his father was a Housemaster. Given that the school was also his family home, Rugby played a large part in his formative years. The school has a tradition of creating poets – forerunners of Brooke in the nineteenth century include Matthew Arnold, Arthur Hugh Clough and Lewis Carroll.

Brooke went on to study first Classics and then English Literature at King’s College, Cambridge, where he was also awarded a Fellowship in recognition of his work on John Webster. Brooke’s circle in Cambridge included Lytton and James Strachey, Geoffrey and Maynard Keynes and Virginia Woolf. He was a leading figure of a group of friends dubbed the Neo-Pagans for their love of nature, camping, rambling and naturism. He became interested in socialism and was President of the University Fabian Society.

Brooke was strikingly good looking – ‘the handsomest young man in England’, according to Yeats. He had a difficult relationship with a dominant mother and a complex personality, which led to a number of troubled sexual and emotional relationships with both men and women. He suffered severe mental health problems during 1912, following which he travelled extensively in North America and the Pacific. He settled for a time in Tahiti, where he wrote a number of striking poems and is believed to have fathered a child by his Tahitian lover, ‘Mamua’.

Brooke was a protégé of Eddie Marsh, Private Secretary to Winston Churchill and a leading figure in literary and cultural circles. Brooke and Marsh together conceived the idea of the influential Georgian Poetry anthologies, in which some of the war poems of Graves, Sassoon and Nichols first appeared.

Brooke volunteered for active service at the outbreak of war in August 1914 and, with the help of Marsh and Churchill, gained a commission in the Royal Naval Division. He was part of the British Expeditionary Force which attempted to check the German advance on Antwerp at the start of hostilities. After this first shocking experience of war he wrote five sonnets which at the time were lauded for their eloquent patriotism and which in later years were derided for their hollow sentimentalism.

Brooke died in 1915, before seeing further action. En route to Gallipoli a mosquito bite on his lip became infected and he died of blood poisoning. He died on St George’s Day, Shakespeare’s birthday, and was buried in a remarkable ceremony on the Greek island of Skyros. He immediately became part of a romantic myth which lit the imagination of a country still excited by the concept of youthful idealism and sacrifice. Churchill led the way in an emotional tribute in The Times:

“He expected to die; he was willing to die for the dear England whose beauty and majesty he knew… The thoughts to which he gave expression in the very few incomparable war sonnets which he has left behind will be shared by many thousands of young men moving resolutely and blithely into this, the hardest, the cruellest and the least rewarded of all the wars that men have fought.”

Brooke is at the same time one of the most mythologised and one of the most demonised of modern poets. He is, however, a more complex and intelligent figure than is often supposed. His five sonnets of 1914, which are not representative of his other work, captured the mood of a particular moment and no doubt he would have written differently had he survived to see how the war progressed and attitudes changed. As the imagery of ‘The Soldier’ suggests, Brooke’s passionate patriotism was driven more by a love of the English countryside than ‘plutocratic, dirty’ English society, about which he was deeply ambivalent.

If I should die, think only this of me:
That there’s some corner of a foreign field
That is for ever England. There shall be
In that rich earth a richer dust concealed;
A dust whom England bore, shaped, made aware,
Gave, once, her flowers to love, her ways to roam,
A body of England’s, breathing English air,
Washed by the rivers, blest by suns of home.

And think, this heart, all evil shed away,
A pulse in the eternal mind, no less
Gives somewhere back the thoughts by England given;
Her sights and sounds; dreams happy as her day;
And laughter, learnt of friends; and gentleness,
In hearts at peace, under an English heaven.

The Collected Poems of Rupert Brooke, with a Memoir by Edward Marsh (1928)
The Neo-Pagans: Friendship and Love in the Rupert Brooke Circle, by Paul Delaney (1987)
Rupert Brooke, Life, Death and Myth, by Nigel Jones (1999)