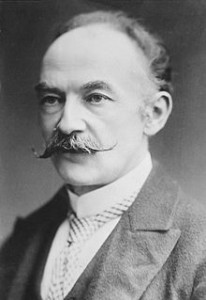 Thomas Hardy (1840-1928) was a major Victorian novelist and short story writer who transformed himself into a major twentieth-century poet. He grew up near Dorchester, a builder’s son, and never went to university, but worked as an architect for several years. Finding that no one wanted to publish his poems, he began to write novels set in his home patch, ‘Wessex’, and made a breakthrough with Far from the Madding Crowd (1874). Other very popular novels followed, but after attacks on Tess of the d’Urbervilles (1891) and Jude the Obscure (1895), he turned from fiction to poetry, publishing the first of many volumes, Wessex Poems, in 1898. His Poems of 1912-13, inspired by the death of his wife, are among the greatest in English.

He had written about war long before 1914. While he was growing up there were still plenty of people around who remembered the Napoleonic wars, when the French had seemed poised to invade Dorset; this is the background to his novel The Trumpet-Major (1880). He was fascinated by what he called ‘the Great Historical Calamity, or Clash of Peoples, artificially brought about some hundred years ago’. It seemed impossible that another European upheaval could ever happen, and he agreed with Tolstoy’s denunciation of war, ‘with all its senseless and illogical crimes’. His sympathies were not with the generals and emperors but with the victims, the sailor taken by the press-gang or the two young men in ‘The Melancholy Hussar of the German Legion’ (1890) who are executed for desertion.

He wrote a group of fine poems around the time of the Boer War (1899-1902). ‘Drummer Hodge’ may have influenced Rupert Brooke’s ‘The Soldier’, but in Hardy’s perspective the young man does not understand what is happening and his death is not glorified:

They throw in Drummer Hodge to rest

His landmark is a kopje-crest

That breaks the veldt around;

Each night above his mound.

Fresh from his Wessex home –

The meaning of the broad Karoo,

The Bush, the dusty loam,

And why uprose to nightly view

Strange stars amid the gloam.

Yet portion of that unknown plain

Will Hodge for ever be;

His homely Northern breast and brain

Grow to some Southern tree,

‘The Man He Killed’ was written around the same time:

‘Yes, quaint and curious war is!

You shoot a fellow down

You’d treat if met where any bar is,

Or help to half-a-crown’.

Not long afterwards he started work on The Dynasts (1904-08), an extraordinary ‘epic’ in verse, blank verse and prose about the Napoleonic wars. This is far from his best work, and is little read today, but was much admired by his contemporaries and contains some passages of great power. There is a Spirit of the Pities which is appalled by the slaughter:

Each for himself, his family, his heirs;

For the wan weltering nations who concerns, who cares?

Other spirits look down from a ‘vague altitude’ on Europe, where ‘the peoples, distressed by events which they did not cause, are seen writhing, crawling, heaving and vibrating in their various cities and nationalities’. Napoleon’s army is described as a ‘caterpillar shape’ from which men drop off and die.

Hardy is savagely ironic about the statesmen on both sides.

When the First World War broke out he was appalled, writing that ‘the world, having like a spider climbed to a certain height, seems slipping back to what it was long ago’. Nevertheless, though in his mid-seventies, he did what he could to assist the war effort. His fine poem ‘Men who March Away’ was published in September 1914 and has remained popular; ‘A Call to National Service’ (March 1917), written by request, is comparatively weak. The fact that this war had started almost a century after the end of the Napoleonic wars had not gone unnoticed. W.N. Ewer, writing in 1917, drew the obvious parallel in his poem ‘1814-1914: On reading The Dynasts’:

A hundred years passed – once again: – ‘The liberties

Of Europe are at stake!’

Once again the statesmen bid the silent Englishmen

Heedless of the story of their fathers’ ‘War for Freedom’

Under Pitt and Castlereagh.

Hardy’s deepest feelings about war were probably expressed in his famous ‘In Time of “The Breaking of Nations”’ (1915). He sympathised with ordinary Germans, and a poem of 1920, ‘And There Was a Great Calm’, sadly wondered whether all the suffering could have been avoided.

Siegfried Sassoon revered him and in 1917 dedicated The Old Huntsman to him; Hardy particularly enjoyed the grimmer poems. He also persuaded his friend Wilfred Owen to read The Dynasts.   Owen was probably struck by the repeated word ‘pity’, and his poem ‘The Show’ recycles some of Hardy’s images. The spectator looks down from a ‘vague height’ on a vast tragedy; the armies are ‘thin caterpillars’. He also sympathised with Hardy’s internationalism.

After the war Sassoon saw a great deal of the older poet and one of his best post-war poems, ‘At Max Gate’, is about him. In 1919 he organised a tribute from forty-three younger poets, who particularly thanked him for The Dynasts.