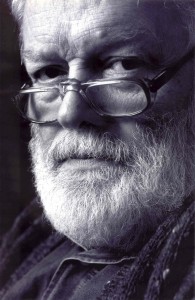 Michael Longley was born in Belfast in July 1939, the eldest of twin boys. His parents, Richard and Constance Longley, were both from England, and moved to Belfast in the 1920s. Longley was educated at Belfast’s Royal Academical Institution, and then, from 1958-1963, at Trinity College Dublin, where he studied Classics. He returned to Belfast in 1964 where he has lived ever since. At Trinity he met other young poets – among them Derek Mahon and Brendan Kennelly – and on his return to Belfast developed literary friendships with Seamus Heaney and Paul Muldoon. He is one of a generation of poets in Ireland who brought about a new ‘renaissance’ in Irish writing from the 1960s onwards.

Longley’s father, Major Richard Longley, served in the London-Scottish regiment during the First World War, and his military service has been a long-standing inspiration for his poet-son. Longley’s first collection, No Continuing City was published in 1969, and contains the powerful elegy for his father, who died in 1958, ‘In Memoriam’. In the poem, Longley links his father’s wartime career with his later suffering (‘your old wounds woke / As cancer’); at the same time he projects himself as a metaphorically born out of his father’s survival of the Great War battlefields. That First World War inheritance is both familial and literary, given the extent to which Longley’s poems are haunted not only by Richard Longley’s wartime experience, but also by the poet’s own absorption of the work of twentieth-century soldier poets – notably Edward Thomas, for whom Longley has written several tribute poems and elegies.

With the onset of the ‘Troubles’ in Northern Ireland in 1969, Longley’s poetry took on a new political resonance. His poetry is distinguished by the way it draws imaginative links between conflicts past and present, and in doing so probes some of the most difficult ethical questions thrown up by the experience of the poet’s home ground. His versions and adaptations from Homer, for instance, obliquely connect the Trojan War with some of the worst atrocities of the twentieth century, as well as with the Northern Irish Troubles. In one of his best known poems, ‘Wounds’, from 1972, his father’s death in World War I is linked to sectarian killings in Northern Ireland, in a complex exploration of victimhood and sacrifice. His poems are also, as Paul Muldoon has observed, emblematic of ‘an imaginative domain in which we can all move forward’. The poignant and thought-provoking 1994 Homeric poem ‘Ceasefire’ addresses the difficulty of overcoming the past, of trying to break a cycle of violence: ‘I get down on my knees and do what must be done / And kiss Achilles’ hand, the killer of my son’.

One of the outstanding elegists and war poets of the last four decades, Longley is also preoccupied with love – that ‘No Man’s Land’, as he calls it, ‘between one human being and another’ – and with the beauty (sometimes savagery) of the natural world. Those themes – as with such predecessors as Robert Graves and Edward Thomas – are entwined throughout his writings, expanding what we understand by the term ‘war poet’. In the inter-linked modes of love poet, war poet and nature poet, Longley is, as Heaney described him, a ‘custodian of griefs and wonders’. He has been the recipient of the Queen’s Gold Medal for Poetry, the Wilfred Owen Medal, the Whitbread Prize, and the T.S. Eliot Prize. He was elected to a three-year term as Ireland Chair of Poetry in 2008.

Here are two pictures from my father’s head –
I have kept them like secrets until now:
First, the Ulster Division at the Somme
Going over the top with ‘[****] the Pope!’
‘No Surrender!’: a boy about to die,
Screaming ‘Give ‘em one for the Shankill!’
‘Wilder than Gurkhas’ were my father’s words
Of admiration and bewilderment.
Next comes the London-Scottish padre
Resettling kilts with his swagger-stick,
With a stylish backhand and a prayer.
Over a landscape of dead buttocks
My father followed him for fifty years.
At last, a belated casualty,
He said – lead traces flaring till they hurt –
‘I am dying for King and Country, slowly.’
I touched his hand, his thin head I touched.

Now, with military honours of a kind,
With his badges, his medals like rainbows,
His spinning compass, I bury beside him
Three teenage soldiers, bellies full of
Bullets and Irish beer, their flies undone.
A packet of Woodbines I throw in,
A lucifer, the Sacred Heart of Jesus
Paralysed as heavy guns put out
The night-light in a nursery for ever;
Also a bus-conductor’s uniform –
He collapsed beside his carpet-slippers
Without a murmur, shot through the head
By a shivering boy who wandered in
Before they could turn the television down
Or tidy away the supper dishes.
To the children, to a bewildered wife,
I think ‘Sorry Missus’ was what he said.