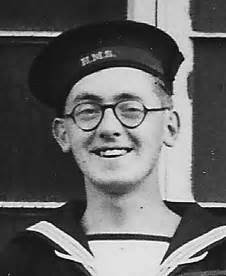 Charles Causley was unusual amongst the first rank of poets who saw active service in the Second World War. First and foremost, he survived. Additionally, he served in the Royal Navy, as a seaman, and came from a poor working-class background – the son of a Western Front survivor who died as a result of being gassed when his only child Charles was 7. That war, that man, and his death understandably meant little to the boy – yet they came to affect the adult Causley deeply, especially post-war.

Born in Launceston in 1917, Causley attended the Cornish town’s ‘National School’ and Grammar schools. Thereafter, he was largely self-educated, working in ordinary jobs between until enlisting in 1940.

After training in Plymouth and Lincolnshire, he joined the destroyer HMS Eclipse at Scapa Flow as an Ordinary Seaman Coder. Convoy escort duties took him to West Africa, and then Gibraltar, transferring to the shore base for service around the Med (where Eclipse later sank, with heavy losses). Rising to Petty Officer Coder, Causley joined the new carrier HMS Glory at Belfast, sailing to the Pacific. He was demobilised in 1946, chose to train as a teacher, and returned to teach in his old school for nearly 30 years.

Causley wrote only early drafts of some poems whilst in the Navy, publishing just one (although several short plays were broadcast and published in the 1930s). The floodgates of his poetry and other writing only really opened after the war, in an ordinary civilian working life underpinned by naval experience, lore and language – as well as a powerful sense of ‘survivor’s guilt’. Indeed, one early published collection (1953) was entitled Survivor’s Leave. Other collections include Farewell, Aggie Weston (1951: see below), Union Street (1957), Johnny Alleluia (1961), Underneath the Water (1968), Secret Destinations (1984) and A Field of Vision (1988). He published many collections for children as well as a short-story collection mainly about wartime experiences – Hands to Dance and Skylark (1951).

That haunted – and haunting – blend of reflections on comradeship, loss, anger, isolation, shame and obligation informs many of his poems drawing upon war in one way or another. Some recount evocative episodes, or sketch insightful portraits, from Causley’s six years of service. Others are a veteran’s musings, up to nearly 50 years on, about ‘aftermath’. The war subtly infused much of his peacetime world and vision.

Causley’s writing has many tones: not just sombre or portentous. His poetry – comic, magical, mischievous, mystical, spiritual (and spirited) by turns – has impressive technical skill, much learning lightly worn, and an unfailing instinct for coining an image or a turn of phrase.

Rather unfairly stereotyped by some as ‘a ballad poet’ (perhaps because few ever used that form in the 20th century), or ‘a children’s poet’ (linked to his primary-level teaching), or ‘a Cornish poet’ (since he indeed deeply loved the county), his ‘voice’ is simultaneously quite individual and recognisably universal. He loved landscapes, travel, music, art, history, myth and legend. And people, too: in all their mysterious varieties of life, pain, comedy and character.

But war – the impact of 1914-18 (and still earlier conflicts), as well as of 1939-45 – seems always inescapable. Even poems with no immediate connection to the conflict often subtly signal its lasting power and influence.

Writing, editing and broadcasting after early retirement in 1976, Causley’s later years brought increasing recognition, honours and travel. He never married, struggling through later years in a modest terraced house in his beloved Launceston, before dying in 2003. His reputation and legacy grows steadily, and his home (now held in trust, and much restored) serves as a writer’s retreat and an occasional performance venue. A 60-minute documentary, ‘The Poet’, is scheduled for broadcast by BBC4 during his centenary year, 2017.

Around 50 of Charles Causley’s 270-odd poems deal directly with war, to at least some extent: ‘his’ war, especially. A fine, characteristic example – capturing his time and friends at sea (as opposed to those poems powerfully considering what it all means in hindsight) – is ‘Song of the Dying Gunner AA1’. It’s a ballad shot through with sailors’ slang and the wistful musings of an anonymous casualty representing so many – some of whom Causley himself knew well.

The Song of the Dying Gunner AA1

Oh mother my mouth is full of stars
As cartridges in the tray
My blood is a twin-branched scarlet tree
And it runs all runs away.

Oh ‘Cooks to the galley’ is sounded off
And the lads are down in the mess
But I lie down by the forrard gun
With a bullet in my breast.

Don’t send me a parcel at Christmas time
Of socks and nutty and wine
And don’t depend on a long weekend
By the Great Western Railway line.

Farewell, Aggie Weston, the Barracks at Guz,
Hang my tiddley suit on the door.
I’m sewn up neat in a canvas sheet
And I shan’t be home no more.