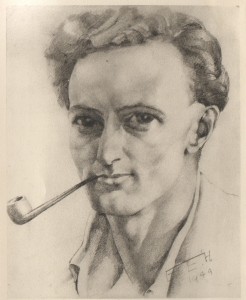 Jarmain was a bit of a loner and from an early age liked bird watching. He won a scholarship to Shrewsbury School and then went to Queens’ College, Cambridge, where he read mathematics and gained a blue for gymnastics. Every summer he travelled to France and Italy and developed a real taste for European literature: Jean Giono and D’Annuzzio in particular. His great friend and brother-in-law, Michael Barkway worked for the BBC as news editor for the Empire and Overseas Service.

After graduation in 1933 Jarmain married Eve Houghton an art student who had trained at the Royal Academy. They moved to West Pennard, near Glastonbury in Somerset. Jarmain spent most of his time writing and was known locally as a bit of a recluse. By 1937, to make ends meet, he worked as a schoolmaster at Millfield School in Street, teaching Mathematics, English Literature and Italian.

Jarmain’s restless intelligence was always seeking new places and new writers, and by 1938 John Jarmain’s roving eye sought the friendship of a younger woman, Beryl Butler who sometimes stayed in Pilton. Their affair blossomed and Jarmain later divorced his wife. In September 1939 Jarmain joined up and became a young artillery officer. He then married Beryl Butler in Salisbury on 10th May 1940, the same day Hitler chose to invade France and Belgium. Immaculate timing.

Jarmain served in 242 ‘Oban’ Battery, 61st Anti-Tank Regiment, Royal Artillery attached to the 51st Highland Division. After two year’s hard training in Scotland they were sent in convoy to Egypt via Capetown and first saw action at the Battle of El Alamein in October/November 1942. From then on it was a continuous series of hard fought battles: Tobruk, Mersa Brega, Misurata, Leptis Magna, Tripoli, the Mareth Line, Wadi Akrit and Enfidaville until the surrender of Tunis in May 1943. As anti-tank gunners they were often in very exposed positions in the front line. As 2 i/c Captain Jarmain often travelled in a jeep with his batman/driver L/Cpl John Lambie, a fine trumpet player who could play anything from Tiger Rag to Handel.

Much of John Jarmain’s best poetry was written at this time, often on the move, living rough in the desert in ‘doovers’ or small dugouts and writing by the light of the moon. Poems such as ‘El Alamein’, ‘Sand’, ‘Fear’, ‘Orchids’ and ‘Leptis Magna’. Jarmain loved the desert. The poems were always sent back in numbered airmail letters to his wife.

Then in July 1943 came the invasion of Sicily. Jarmain was promoted Major and commanded 193 Battery. They saw action at Vizzini, Ramacca, Gerbini and in the Sferro Hills. In November the Division sailed back to England where they prepared for ‘D’ Day.

The battery landed in Normandy on ‘D+1’ and ended up in an exposed salient to the east of Caen in the Calvados region. Keeping Panzers at bay was no easy matter. A stalemate ensued and casualties mounted.

On the morning of 26th June 1944, whilst driving down to inspect his troops at dawn, in the village of St Honorine-la-Chardonorette, John Jarmain was killed by a fragment of mortar shell and is buried in the 6th Airborne Cemetery at Ranville.

He left behind two wives, five children, a novel, a collection of poems and 150 letters which are now deposited at the University of Exeter.

There are flowers now, they say, at Alamein;

Yes, flowers in the minefields now.

So those that come to view that vacant scene,

Where death remains and agony has been

Will find the lilies grow –

Flowers, and nothing that we know.

So they rang the bells for us and Alamein,

Bells which we could not hear:

And to those that heard the bells what could it mean,

That name of loss and pride, El Alamein?

– Not the murk and harm of war,

But their hope, their own warm prayer.

It will become a staid historic name,

That crazy sea of sand!

Will be the garland for our brow, our claim,

On us a fleck of glory to the end:

And there our dead will keep their holy ground.

But this is not the place that we recall,

The one blotched building, lacking half a wall,

The grey-faced men, sand powdered over all;

The tanks, the guns, the trucks,

So be it: none but us has known that land:

El Alamein will still be only ours

And those ten days of chaos in the sand.

Others will come who cannot understand,

Will halt beside the rusty minefield wires

And find there – flowers.

Flowers in the Minefields – El Alamein to St Honorine

John Jarmain – a short appraisal of his life and work