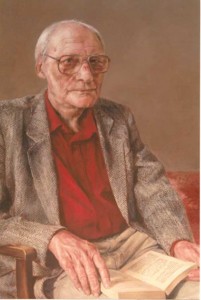 Vernon Scannell was born in 1922 in Spilsby, Lincolnshire. The family, always poor, moved frequently: Ballaghaderreen in Ireland, Beeston, Eccles, before settling in Aylesbury, Buckinghamshire, where his father, who had fought in the First World War, developed a reputation as a good portrait photographer and the family’s severe financial difficulties began to ease. Scannell left the local council school at fourteen and got a job in an accountant’s office. His real passions, however, were for the unlikely combination of boxing and literature. He had been winning boxing titles at school and had been a keen reader from a very early age, although not properly attaching to poetry until about aged fifteen, when he picked up a Walter de la Mare poem and was ‘instantly and permanently hooked’.

In 1940 Scannell enlisted in the Argyll and Sutherland Highlanders. The war took him into action in the North African desert and then the Normandy invasion, where he was wounded near Caen and shipped back to a military hospital before being sent onto a convalescent depot. Scannell had always very much disliked army life, finding nothing in his temperament which fitted him for the part of a soldier. So ‘on impulse’, after V.E. Day, with the war over as far as he was concerned, he deserted and spent two years on the run, earning his living with jobs in the theatre, professional boxing bouts and tutoring and coaching, all the while teaching himself by reading everything he could. During this evasive time Scannell was writing poetry and was first published in The Tribune and Adelphi. He was also boxing for Leeds University, winning the Northern Universities Championships at three weights. In 1947 he was arrested and court-martialled and sent to Northfield Military Hospital, a mental institution near Birmingham. On discharge he returned to Leeds and then London, where, supporting himself with teaching jobs and boxing, he settled down to writing. 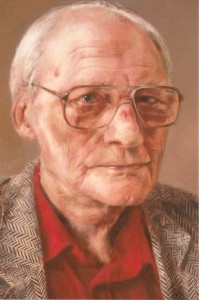 Scannell won many poetry awards and his war poems, such as ‘Walking Wounded’, are regarded as among the best to come out of the Second World War. A.E. Housman said that ‘the business of poetry is to harmonise the sadness of the universe’ and Scannell quoted this with approval. Scannell’s poems, with their themes of love, violence and mortality, were shaped and influenced by his wartime experiences. He had his own distinct voice and was one of the most accomplished poets writing in the second halfof the 20th Century and well into the first decade of the 21st: his final collection ‘Last Post’ was published in 2007; he had been working on it until not long before his death.

Vernon Scannell died at home in West Yorkshire on 17 November 2007, aged 85. Obituaries were published in the national and regional Press and links to a selection of these are given below.

In 2006 Vernon Scannell selected his poem ‘Casualty-Mental Ward’ for the WPA’s website, saying about the poem that it ‘is a villanelle and I think the repetitions are particularly suitable for the subject, the almost obsessive returning to the same thing’:

Something has gone wrong inside my head.
The sappers have left mines and wire behind,
I hold long conversations with the dead.

I do not always know what has been said;
The rhythms, not the words, stay in my mind;
Something has gone wrong inside my head.

Not just the sky but grass and trees are red,
The flares and tracers—or I’m colour-blind;
I hold long conversations with the dead.

Their presence comforts and sustains like bread;
When they don’t come its hard to be resigned;
Something has gone wrong inside my head.

They know about the snipers that I dread
And how the world is booby- trapped and mined;
I hold long conversation with the dead;

As all eyes close, they gather round my bed
And whisper consolation. When I find
Something has gone wrong inside my head
I hold long conversations with the dead.

Vernon Scannell: Poet whose work was informed by the horrors of war and by the forces of ironic mistrust competing within himself, Times Online, 20 November 2007.