Latest news! According to the websites of both Bloomsbury.com/uk and Amazon.co.uk, the publication date for this title has been moved from 23 August to 2 August, 2018 — that is, this week!

A new biography of Robert Graves by Dr Jean Moorcroft-Wilson is due to be published by Bloomsbury in August 2018, covering the years from his birth in London, school at Charterhouse, holidays in Harlech, his service with the Royal Welch Fusiliers in the First World War, marriage to Nancy Nicholson, study at Oxford, 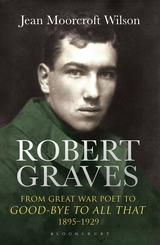 the arrival of the American poet Laura Riding, his departure to Egypt in 1926 with both women and his and Nancy’s four children to be a Professor of English at Cairo University, and their return to England. It will also cover their and their circle’s tumultuous relationships in London, until Riding’s jump from a high window and Graves’s eventual departure to Mallorca with Riding, but without Nancy or his children, after writing his autobiography Good-bye To All That at the age of 33.

Robert Graves: From Great War Poet to Good-bye To All That 1895-1929 by Jean Moorcroft-Wilson will be published by Bloomsbury Continuum on 2 August 2018.

Dr Jean Moorcroft Wilson is well-known to many WPA members and those of other war poetry groups for her writing and lectures and has been described as the ‘doyenne of war poet biographers’. Her publications include biographies of Isaac Rosenberg (on whom she lectures worldwide), Siegfried Sassoon, Edward Thomas and Virginia Woolf. This new biography will cover the whole of the period in which Robert Graves wrote most of his work about war, from the publication of his first book of poetry Over the Brazier in the year of the Battle of the Somme, in which he was severely wounded and left on the battlefield presumed ‘died of wounds’, to that of his famous memoir of the war, Good-bye To All That.

Bloomsbury Continuum is offering an exclusive discount of 30% off the price of this book to members of the Robert Graves Society or others who attended the recent 14th International Robert Graves Conference at Mallorca, 10th – 14th July 2018. Contact pjvilla@aol.com to obtain the discount code and then order online directly from Bloomsbury, at https://www.bloomsbury.com/uk/robert-graves-9781472929143. Discounts for other markets can be requested from Bloomsbury if required. Please contact pjvilla@aol.com if you would like one for your market. A general pre-order discount of 10% is also available to all.

Prices on Amazon and other bookshops will probably reduce once the publication date has passed. Blackwells are currently offering a pre-order price of £17.21 with free UK delivery. See: https://goo.gl/7T1ozg

Kindle and some other e-book formats are also available for pre-order. These formats will be released on 8 August 2018.

Songs of Darkness, Dreams of Light: Isaac Rosenberg Poem to Feature in BBC’s ‘Last Night of the Proms’.

Isaac Rosenberg: The Half Used Life